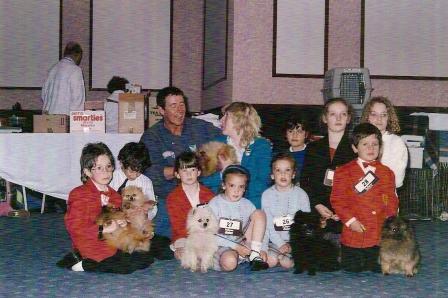 The Junior Handlers Club was set up in approximately 1981 by Jacqui Hurley & Brian Cummins.  Diana Abbott ran a ringcraft club for people who wanted to show their dogs & some of the adults did not like the children getting involved so Jacqui & Brian offered to take the children & so the Junior Handlers were born.  For many years the club was a children’s club & they enjoyed many successes in Jersey, on the Mainland & Abroad.

In 1984 the club was registered as a business & used Halkett Place School for training.  Training was 25p per week. In this year the club toured the UK for two weeks, gave a demonstration in Bath & had tracksuits sponsored by Channel Hotels.  Robert Kirsch agreed to be the Club’s Patron for twelve months. In 1985 the Club became affiliated to the Youth Service and the following year training moved to the old Milk Marketing Board site & to Peacock Farm. In 1987 an adventure weekend was held at Crabbe and in 1988 the club was on the move again this time to Six Rues Hall where they remained for two years.  In 1990 the club was on the move once more and this time found a home at Seaton Youth Club.

In 1991 Princess Antoinette of Monaco was approached to be the Club’s Patron.  In 1992 the club was able to buy a horse box for their agility equipment with support from Telethon.  In 1994 the Club was moved again, this time we had the chance of the sole use of the old Gorey Youth Club for show handling and obedience while the agility moved to Haie Fleurie.  In 1995 the agility training moved to Les Marais Indoor horse school. In 1999 we introduced our own Grade Scheme for show handling & the following year obedience and agility followed.  We also left Gorey to move to Springfield.  In 2001 Foot and Mouth caused major problems for the Club, the Easter Team Match had to be cancelled and members dwindled as we were not allowed to meet and train our dogs.

The Juniors in the earlier years threw themselves into fundraising. In 1987 they held a Pro Dogs Walk and raised the grand sum of £936.06, this was the second largest sum raised and was only beaten by London.  They have also raised funds by holding barn dances, scavenger hunts, jumble sales, coffee mornings, exemption shows and carol singing.  They also used to organize and run their own demonstrations at functions, the most memorable being at the Jersey Dog Club’s Millennium Show.

In the latter years the Club has taken on more adults and introduced the Good Citizen Dog Scheme which makes it into the Club it is today. In 2016 the Club formally changed its name to the Jersey Dog Handlers Association. 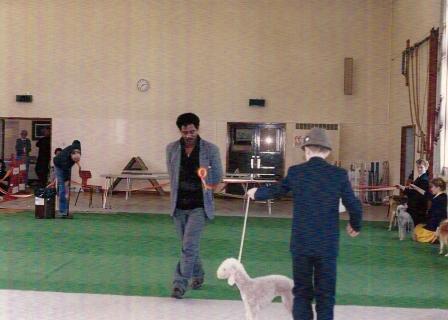 1987: Frances Hurley wins Junior Handling Association/Pedigree ‘Junior Handler of the Year’ and is third in the International Final. Pop Star Chris Amoo is one of the Easter Team Match judges and agility is added to the disciplines.

1988: Frances Hurley judges one of the Junior Handling Association’s semi finals at  Richmond.

1994: The Club moves to it’s own hall. John Le Cornu wins the 12-16 years Working Group at Richmond. The Club holds an Open Day with games and stalls. 1998: Adrian Marett is the Kennel Club Junior Organization ‘Junior of the Year’. Our adults were the Winning Adult Team at the UK Dog Handlers Match, team members were Christine Marett, Melanie Huelin and Pauline Morgan. The Triathlon Competition is born.

2000: Jersey Junior’s attend a Malta Championship Show where club members gained 2nd and 4th places in the junior and ladies handling.  Russell Marett handled the dog he borrowed a Cavalier King Charles Spaniel to Best Puppy in Show much to the delight of it’s owners. Lorraine Dickie wins a handling class in Antwerp on the first trip we could take our dogs abroad under the Pet Passport scheme. The Club becomes affiliated to the Jersey Dog Club.